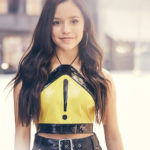 WARNING: Force to be reckoned with!

Jenna Ortega in The Hollywood Reporter.

In response to the question what she sees herself doing in ten years time, she says that she wants to be directing and that she hopes that Hollywood would open up and give Latina women a shot at leading roles. I say: why not now? She has the talent (intensity and realness for drama, her expressive face for comedy) and if you take away this tired notion that the leading lady part can only be romantic, there’s no reason a soon-to-be-16 year old can’t do that.